Monsoons have always played a major role in deciding the economy of India. Somewhere there is excess rainfall while some other place may see deficiency. The consequences of both excess rainfall and deficient rainfall are different but one thing is common in the two. There is shortage of drinking or usable water. There are three ways to tackle this – 1) limit the usage of water, 2) minimize the wastage and 3) finding new sources of water or reviving old contaminated sources. In this post, we have discussed the first one in details. 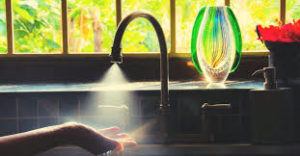 First and foremost cause of shortage of water is the excessive usage of water. Of course, we can’t minimize the amount of water we are drinking. But we can limit the amount of water we use for washing purposes, or bathing purposes. Yes, there is always an optimum limit of usage below which our purpose of using water won’t be met. Excessive use can met our needs no doubt, but also leads to water scarcity that we need to tackle. One example of limiting of usage is seen in the recent Chennai water scarcity.

A group of engineers have developed nozzles that help cut down wastage of water by ninety five per cent in Chennai. The nozzle’s mist-like spray, which works using atomisation technology, reduces water flow on taps from 12 litres a minute to 600 millilitres a minute, saving at least 35 litres of water in a day.

With 40 per cent cut in piped water supply in Chennai, already seven thousand pieces have been sold. Earth Fokus, the start-up by four engineering graduates from Madras Institute of Technology, was launched in 2017, but their product sale gathered momentum only over the last few months as the city started facing a severe water scarcity.

Under severe water stress, many IT parks are fitting these nozzles to washbasin taps. Many who had installed these as a pilot are reportedly planning to expand this to all their facilities. One IT facility alone, the team says, saves 7,000 litres of water every day. “We have installed special nozzles into washbasin taps that helps us make the best use of available water. These nozzles reduce the water flow to a mist bringing down water consumption by 80 % and preventing wastage,” IT major Cognizant claimed in a statement.

Yes, Indian engineers have come up with such an innovation. Why can’t we? We Samaritans would like to promote and implement any such innovation if it comes to our notice.